Maybe a little dull to some, but do not be fooled. Maps can be very interesting. Particularly colourful, interactive and FREE maps.

This week, Ritchie Somerville swung by the Urban Room to teach Council planners about maps and freely accessible information – things that could help us to better understand places in Edinburgh. Ritchie is the Council’s Innovation and Futures Manager, and during his demonstration, we were introduced to several different maps. So here are some potentially interesting interactive maps for your perusal and enjoyment.

So I know we’ve all used Google Maps before, but there are some features that you might not know about. Like live traffic information to see which routes are busiest.

This is what the traffic looks like in Edinburgh right now, in case you wanted to see how busy the streets are at 15.53 on a Wednesday afternoon

Click on the three lines (the burger!) in the top left of Google Maps, then select “traffic”. If you click the key at the bottom, you can see what the traffic is usually like at different times and on different days, too.

There are also loads of other useful things Google Maps can do, like give satellite images, and 3D images of major cities. Also street view.

You probably already knew all these, but worth a mention anyway.

Maybe not as commonly used as Google, but Bing does have an Ordnance Survey map linked up. So if you’re interested in that, Bing’s the interactive map for you! 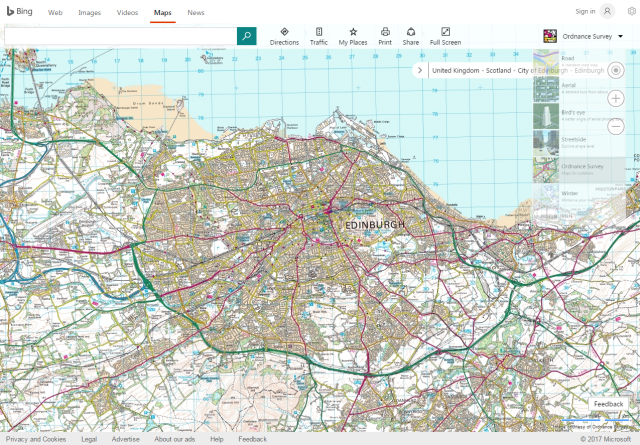 Hover over “Road” in the top right corner (shown as “ordnance survey” on this screenshot). A drop down list will appear. Click on Ordnance Survey for all your OS needs

This one is more interesting. More complicated, but more interesting. CDRC maps show census data in a more visual way than just numbers on a spreadsheet. The maps colour code all sorts of information, from population density to top method of travel to work. Even central heating type, if that sort of info floats your boat. 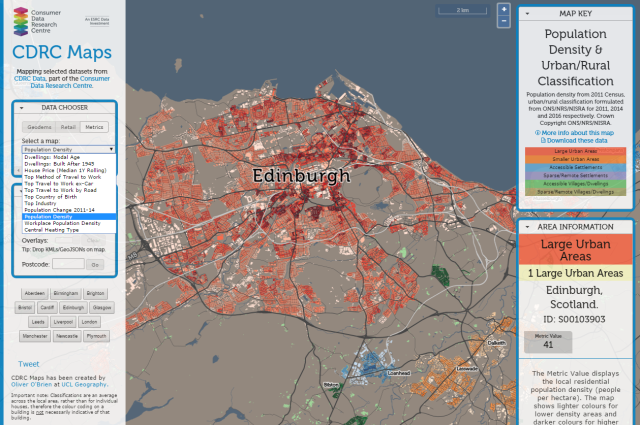 A drop down list on the left lets you choose your data set, and hovering over the map gives you specific data for wherever your curser is

This one shows the method of travel people take to and from work. The heavier the line, the higher the number of people who travel that way. You can switch from travelling to the selected location for work, or from the selected location to work. Useful to see how far people commute, and by what means. There’s also a ‘Region Commute’ version, showing travel from longer distances.

A bit different, but still interesting. This map shows the most recent million tweets worldwide. And it’s live. The tweets are happening right now.

I know people tweet about all sorts, so you do get some random stuff. But if you did want to see where someone complained about their disappointing ham sandwich (or, you know, where they bought a good lunch from), it’s worth having a gander at this map.

It gives non biased representations of what people do and think, and where

And the Council has its own interactive map! The map has loads of different layers that you can put on one map at the same time. Useful for making connections between different data sets.  It’s kind of information heavy, but can give you a LOT of useful info all at once… Or you could just select every layer and see what Edinburgh looks like with all the data available mapped onto it.

There are a whole host of layers to choose from. Shown is listed buildings and conservation areas

As Ritchie explained to us this week, maps can be used to help us see a place in a different way. Making your own maps can also be handy to see a place differently – you don’t need to be a cartographer or a tech wizard to make a map that works. 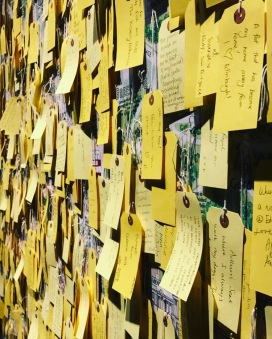 So try a few links and see if any of them make you think about Edinburgh any differently… It’s a way to kill a few minutes when you’re bored, if nothing else.

I hope you’ve found at least some of these maps at least vaguely interesting. And if not, I hope you find something you are interested in elsewhere on the blog.

This site uses Akismet to reduce spam. Learn how your comment data is processed.